The impact on the fertilizer industry

2020, what a year it was. At first, it seemed that the global pandemic did not hit the shipping market as hard as originally thought, but with large cargo volumes still in the pipeline, the worst was yet to come. The development of the shipping market in 2020 and the coronavirus pandemic In March, May, June and July in 2020, industrial activity went down due to lower demand and many factories were shut down as a result of the global pandemic. To stop the spread of the pandemic, people were limited in their movements, which meant that shops closed, tourism stopped and demand for all kinds of products in general came to a dramatic halt. As a result of this, demand for transport was hit hard, which led to ships laying idle and shipping owners not knowing what to do. Layby berths and anchorage areas were full of vessels looking for employment, which provided an imposing landscape to watch, especially here in Rotterdam and surrounding areas.

It felt like the shipping industry was doomed again to a scenario similar to the financial crisis of 2008. The market decline was also widespread; from bulk carriers to LNG carriers and from small coasters to the big crude carriers, all markets went into a downward spiral which did not seem to come to an end soon. Figure 1 shows the strong decline in earnings in USD per day of the Capesize, Panamax, Supramax, and Handysize type vessels.

Light at the end of the tunnel? 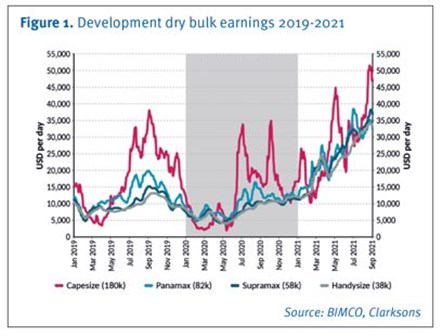 This period marked a beneficial period for charterers; there was enough supply of shipping tonnage due to the shortage of cargo, which meant low freights. But, there was light at the end of the tunnel for the shipowners. The period after the summer saw an increase in earnings (see figure 1) due to the increase in Unusual  development of freight rates in 2021. The Capesize market still had some fluctuations, but the overall trend was a strong increase in earnings/daily hires from the end of 2020 towards the end of 2021. What also drew attention was the way the freight rates demand for vessels in general. The overall feeling was that the pandemic was more or less over. Factories were in full swing again and the industry was busy catching up and resuming where they left off before the pandemic started. This was a rather surprising development given the fact that just a few months prior, the recovery looked a long way off.

Increase in freight prices
The increase in demand for ships led to a strong increase in freight pricing. In November and December 2020 the market became stronger and stronger with a high demand for tonnage. The end of the year is often a busy time for the shipping industry – supplies are bigger because most traders are trying to reach their contractual obligations for yearend. The high demand for transport also meant that the supply chains needed to be able to catch up, and this was something that was lacking. As a result, congestion arose which caused vessels to remain longer in port, which resulted in fewer available vessels and more tension in the shipping market. How the congestion influenced the market, will be discussed more extensively later in this article. The winter period also brings increased problems with poor weather, and this slows the turnaround of vessels in ports. The increase in freight rates caused a positive feeling in the shipping market amongst shipowners.


Extreme increase of container prices
Many reports were written and forecasts were made by experts in the shipping field, but no one expected the developments which were to come. Container prices saw an increase in the price of almost ten times compared with the year before. At the beginning of 2020, a 40ft container from China to Rotterdam was priced at around USD 2,000. Now, the price of this same container is around USD 15,000-20,000. As a result, a lot of multinationals started to search for alternative ways to transport their goods. Bulk carriers were used to transport containers which, as a consequence, had an influence on the shortage of tonnage in the segment of these particular vessels. A good example of this situation is the well-known Swedish self-building furniture store, which started to charter bulk carriers and build their own containers to keep ahead of this difficult market.


Unusual development of freight rates in 2021 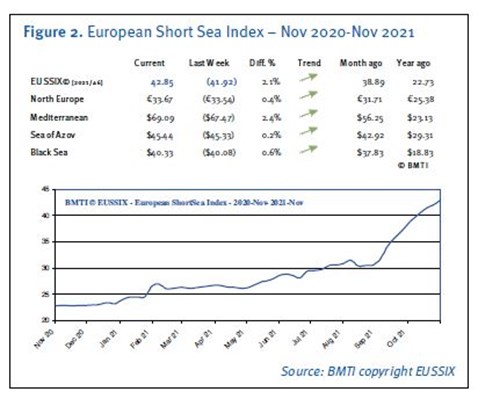 The Capesize market still had some fluctuations, but the overall trend was a strong increase in  earnings/daily hires from the end of 2020 towards the end of 2021. What also drew attention was the way the freight rates developed over the year. Whereas there is normally a standard trend in the market with a relatively weak market with low prices at the beginning of the year, a strong market in the Spring, a low market again in the Summer months, and a strong market towards the end of the year, this tendency was now eliminated, and the market kept growing. ’As a company active in coaster shipping market as owners and brokers, Hudig & Veder operates vessels of between 2,400-3,400 t DWCC (deadweight cargo capacity), and seeing freight rates doubling was not a strange phenomenon any more. The market was also strong worldwide; from China to South America, and from coasters in the short sea market around Europe to Capesize vessels. Figure 2 shows the European Short Sea Index (EUSSIX) which illustrates how the freight rates in the European Short Sea market developed.

Shortages of staff and material
One of the reasons for the very tense market situation was the earlier described fact that the industry was catching up again after the pandemic hit. Another major factor that played a role in this period, was the pandemic-related logistical challenges. Shortages of staff and material were causing serious problems in the various supply chains. Shortage of containers has been a hot item over the recent period, but also shortages of staff on terminals caused major logistical issues with congestion as a result. In China, shortages of river pilots in some areas caused waiting times of almost two weeks, which also had its influence again on the freight rates.

Decarbonization investments
Another development that is playing a role in the development of the freight rates, is the investments by owners in recent years due to decarbonization. For a long period, ship engines were allowed to burn all that was left from the refineries, but now there are more and more restrictions coming into force to reduce the output of pollutant gasses and particles of sea-going vessels. Investments have been made by shipowners and these will influence the freight price levels. In 2020, a new limit was set for the amount of Sulphur in fuel oil which is used on board of ships by the IMO (International Maritime Organization). This meant that in the designated emission control areas, the limit went from 3.5% to 0.5% and within the designated areas the limits were set on 0.1%. This caused owners to look for other, more expensive, types of fuel. In other cases, adjustments on the ship’s engines are needed, as wells as systems that clean the gas of ships (so-called scrubbers) to meet these new regulations. Speaking of ship fuels. Energy prices also showed a strong increase over 2021. Not only the gas prices went up and caused challenges in the supply chains, but also oil prices  saw an increase. Whereas a ton gasoil (MGO) in Rotterdam did cost around USD 200,- in April 2020, the price went to USD 450 – 400 in December 2020, then to USD 590 – 560 for June 2021 and to USD 700,- in mid-October which caused more costs on a voyage basis for shipowners and therefore higher freights. Another phenomenon that can be seen in this tense market and that contributes to the tightness in the market, is that shipping capacity is not always used to its full potential, DWCC. Due to the shortage of vessel capacity, it often happens that 4,000 t DWCC vessels are used to ship 2,000 t of cargo - desperate times require desperate measures, one can say. Charterers are tending to jump on the first available vessel they see in the market and secure it to at least have a vessel instead of waiting for a more suitable vessel tonnage-wise. As a result, shipping tonnage is not efficiently used, adding to a further strain on freight rates.

What the current shipping market means for fertilizers going forward
The feeling is that the high freight rates will remain for the biggest part of 2022. The market will remain tense, fuelled by the also earlier described developments. Of course, new build vessels are underway as shipowners have some money to spend in this market which is in their favour, but it will take time before these vessels will enter the market 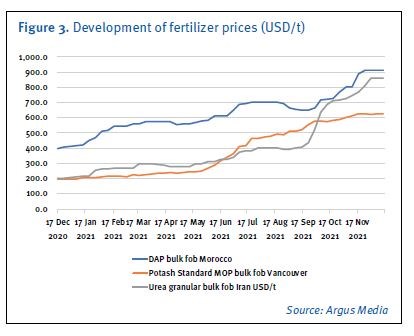 and the supply of tonnage will increase. How the rates will develop in the coming months is difficult to predict. Many experts proved to be wrong in their forecasts over the last year. The Deep-sea bulk market seems to be stabilizing, and let’s hope that the Short Sea market will follow suit to reach a more balanced market with more workable freight rates that everyone is more or less happy with. January should give us a glimpse of how 2022 will be after the dust clouds of a strong December month have disappeared. But what do all these developments mean for the fertilizers as a commodity? According to one large fertilizer  producer/trader, sales prices have tripled for some types of fertilizers over the last 1.5 years. This can be seen in figure 3 which shows the development of fertilizer prices, on which the high freight rates also had their influence. This same producer/trader pointed out that it seems that there are no shifts in the market concerning the relationship between supplier and receiver. What can be observed in other markets is that receivers tend to look for other sources to get their materials from to avoid the high rates for sea transport.

Influence of charterers on the freight rates

There are some ways in which charterers can have their influence on freight rates:

These are factors which could translate into a more favorable freight rates. This applies of course not only to the fertilizer business, but also to all kinds of commodities. Good cooperation between all parties concerned in the chain will be of importance, particularly in these times.

Hudig & Veder went into business more than 225 years ago as a broker company, bringing ship and cargo together to ensure trustworthy transport by sea. Nowadays, we have expanded our activities with fast, flexible and reliable shipping solutions. Focusing on any type of bulk commodity, break bulk and project cargo. In 2020, Hudig & Veder joined forces with Hartel Shipping. Due to this merger, the Hudig & Veder/Hartel fleet now consists of seven modern general cargo vessels ranging in DWCC from 2,400–3,300 t. These vessels are mainly active in the part cargo business and sail around the European continent from the Black Sea to the Baltic Sea. Besides our own ships, we also have our own dry bulk storage in the port of Rotterdam and are active in bulk logistics from storage to transshipment, and barging to road or sea transport. Hudig & Veder is furthermore active as a broker for many well-known companies, is active as a forwarder and provides agencies in Dutch ports.